I wish UNISON would make all NEC meetings fully accessible 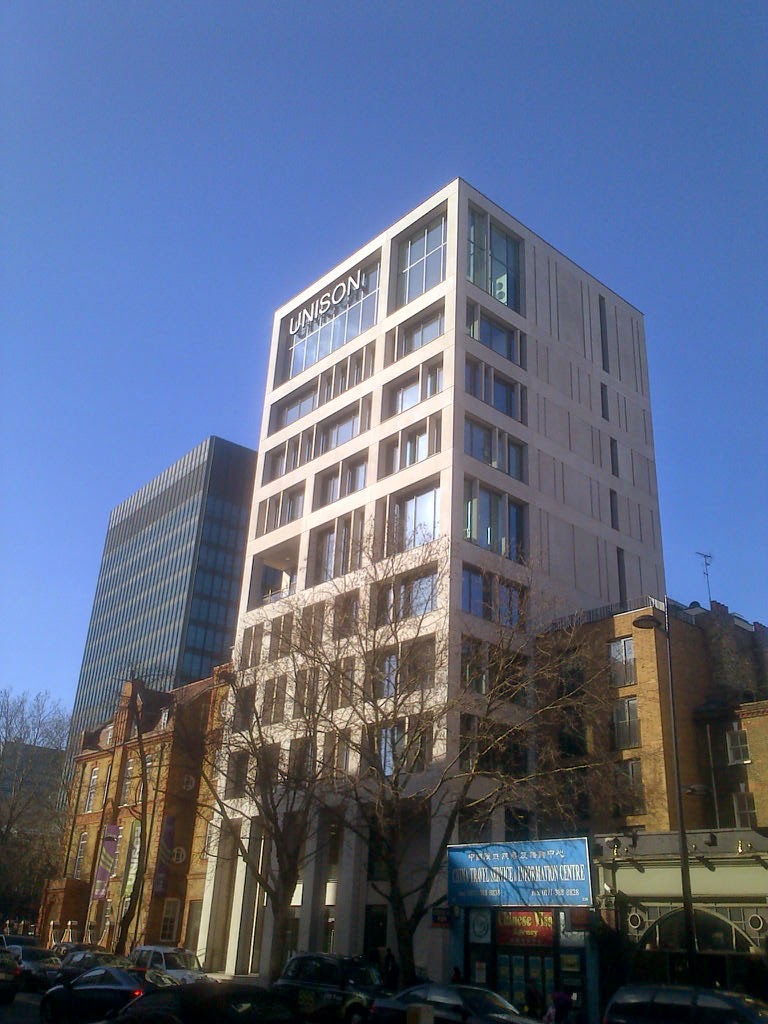 A few weeks ago, UNISON's National Delegates Conference passed a rule change about access to NEC meetings. Over the last two years when the NEC meets, there have in fact, been two NEC meetings not one.

One meeting for those able to make it up to the ninth floor of the Euston Rd centre, and another meeting on the first floor for those who suffer from a disability which prevents them from doing so.

This segregation has been going on since we moved into the 'Great White Elephant on the Euston Rd', as the prolific blogger and fellow NEC member for London rightly calls it.

The top floor council meeting room has floor to ceiling glass windows which mean you cannot avoid looking down onto London from the giddy heights of the tower (see photo). So if you suffer from vertigo you simply cannot be in that room.

And for those who fear lifts or suffer from acute claustrophobia, it's a very long walk up all those stairs.

I've heard horror stories of asthma sufferers walking up to the ninth floor when the lifts aren't working (this happens regularly). And bizarrely, I've seen a dozen NEC members stuck in a broken lift, a metre below the ground floor, as they wait to be rescued and the rest of us eat our lunch.

A consistent group of conscientious NEC members, in solidarity with the Local Government General Seat member, Paul Holmes, who is not able to go up to the ninth floor, sit with him in a video conference room on the first floor. It is just not right to leave our fellow NEC member sitting alone talking through a mic to the rest of the council just because he has a disability.

Video conferencing is sometimes hailed as a technological solution to the difficulty of holding regular national meetings; e.g. when a member cannot get to London for the day.

Sometimes members of the HE SGE connect with the rest of us from their regional offices via a video link up. It isn't perfect but it meant their voice is heard and they are able to vote.

When it is in the same building, however, it is a curious option and is unreasonable to impose it on somebody because of their disability.

There is a simple, agreeable solution: to all meet on the ground floor. But this has apparently been ruled out by the powers that be.

So the response to any repetition of this reasonable proposal is now met with untenable explanations. For example, we are told the sound quality is not good on the ground floor - yet the sound of the video conference facilities aren't exactly great either. I've experienced both and I know which I prefer. If the sound quality needs to be improved down there, then so be it.

We met in the NUT building recently, because the UNISON lifts weren't working again. At the end I pointed out the NEC meeting was much better when we can all see and hear each other on equal terms. Whenever somebody tries to raise this point, however, we're told we are not going to discuss individual member's access requirements which is not the same thing at all.

When you make a contribution (I almost always do), it is much more preferable to see the response of the rest of Council. If you see people nodding their heads or visibly listening to what you have to say - if they're switching off and reading their blackberries or if they're muttering loudly for you to 'shut up' - you can clearly gauge peoples reactions.

Imagine there was a separate NEC room for wheelchair users.

When you sit in the room downstairs, and a vote is taken you have to ask for a count from the Chair but even if you do get a count you cannot see at a glance who voted which way.

All these things are important to full participation in what is supposed to be a democratic decision making body.

One NEC member snarled back at me during an email exchange that raising the issue of access to NEC meetings was becoming an 'annoying din', which is just rude.

A cynic might argue this discrimination against Paul Holmes is punishment for standing in the 2010 General Secretary election. This regular election by the way, as Jon Rogers repeatedly points out, was held exactly five years ago and yet we still don't know the timetable for this election for this crucial post.

Others have called this 'disability apartheid' pure and simple: those of us on the left caucus of the NEC (2013-15) signed a statement and circulated it at last year's NDC, which cause a minor uproar among the top table. It was followed by an NEC meeting which for the first time actually discussed for a minute or two an issue we've not been allowed to raise or vote on previously by any of the last three Presidents.

The same NEC member who slapped this complaint down said that leaflet was 'potentially libelous'. As union activists we should expect to be threatened with libel laws by our employers on occasion, but to be threatened by a fellow trade unionist on the NEC with these pernicious laws designed to stifle free speech is unforgivable.

UNISON has a clear stance against all forms of discrimination - so we should ensure all NEC meetings are fully accessible.

I wish UNISON would think again about the message this gives to members with disabilities. And I wish some people in our union would be a little more open to free speech and allow criticisms to be voiced without such blatant over reactions.

Finally, I hope we in the new 2015-2017 NEC will be able to end this unreasonable situation by voting to meet altogether in a fully accessible room.