I wish UNISON had a decent 'unemployed membership'... 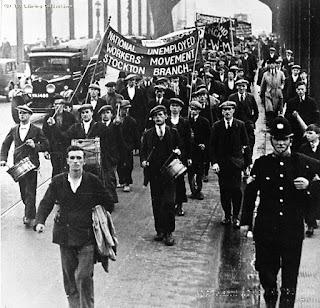 Many moons ago a friend came to visit me at London Met Uni, where they used to work and indeed were very active in UNISON. They'd taken a job elsewhere - at another Uni in fact - but it didn't work out.
So they applied for 'unemployed membership' but were told by London Region they weren't eligible.
They were now in between jobs, doing voluntary work with charities etc (which UNISON has a sector for) but they decided if UNISON - who they'd been loyal to for many years and active for almost as long - didn't want their hard-earned dole money some one else would get it.
I promised I would take it up on the NEC and see what we can do to change things.
Of course, I didn't say *when* I would take it up and there's nothing like a dole queue to focus the mind...
Me? I also transferred my membership to another Uni where I took on some part time work for a while but the contract ran out. So I stopped paying my subs which means - I believe - I'm not eligible for unemployed membership and anyway what's the point of UNISON's unemployed membership? Let's be honest; the powers that be in the London Region supported me like a rope supports a hanged man.
Our Full Time Official after the legendary Harry Lister - who was a good egg - can be heard asking not one but two friendly questions to Linda Perks in this recording of evidence widespread cheating to get Dave Prentis re-elected. He even suggests new ways to ahem, get round the rules... (Lots more here).
And Prentis? Don't get me started... I wouldn't want to find myself writing another one of these now do I?
Unite the Union, on the other hand, is a general union which doesn't seem to care if you were made redundant, resigned or simply been out of work for ages and want to join a union which is visibly fighting for all working people - employed or not - and regardless of 'public' or 'private' sector.
So now I get emails like the one below encouraging me to be active as a 'progressive' person. What a good idea...
I wish UNISON did lots of things - and I blogged a few of those 'wish list' items over the five years I was on the NEC (2010-2015).
I find not being on the NEC liberating and not even being a member of UNISON sort of similar. I imagine this is true for my inspiration - for this blog at least - Jon Rogers, was someone who encouraged me to stand for the NEC: 'you'd be an excellent NEC member... let me buy you a drink' etc. -
It's liberating not to be on the NEC for a number of reasons which I won't go into here - for good reason.
Jon has his own reasons I'm sure - and I have to add how refreshing it is to see someone step back from the 'levers of power' and hand over with a planned succession plan.
Anyway good luck all of you still in UNISON. And those still fighting the good fight on the NEC and in London where we have a peculiar problem. And lots of luck to those seeking to transform the union by standing for the NEC. This year is gonna be a big chance to see a shift to the left.
Right, now - get off the internet, I'll see you on the streets!
--
On January 21, Donald Trump will spend his first day as President of the USA. To mark this day progressive people around the world are determined message of unity and solidarity. Your union is supporting the London part of this global day of action with Women's Marches happening in 20 major cities across the world. Our sister union in the US, the Unite Steel Workers union will be marching in Washington calling for the protection of women's reproductive and worker's rights. A further 76 demonstrations are happening across the US. Be part of this global movement and join us - bring your friends and family and banners.
Use this day to send a message that the politics of Trump and his views on women and minorities are not ours. Unite stands for Unity and Solidarity and that is why we are marching.
When: 12pm, Saturday 21st January
Where: Meet outside of the American Embassy, Grosvenor Square W1A – We will be supplying Unite flags and the march route is https://www.womensmarchlondon.com/the-march
Rally: 2-3.30pm at Trafalgar Square
For further information about how to get there see here The March
--
Image from the TUC Library, currently housed at London Met Uni...
Posted by Max Watson at 01:24